This little blog was was set up as a retort to the original  "Two-Wheeled Locusts" blog. The original blog was obviously set up by a mountain biker... pretty low, alright...

Of course, there are no posts, at all, on the original "wheeledlocuts" blog. Mountain bikers are oblivious to their callous treatment of the natural environment, so blindered by their thrill ride and trail digging exploits, into addiction ---  like this borrow pit digging MTBer grrrl: 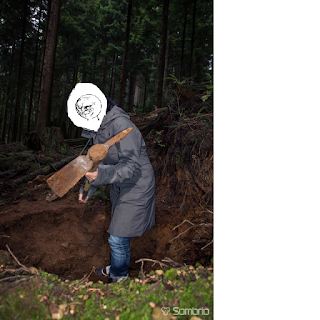 There is more than ample evidence against mountain biking's ongoing freeride activities (riding and trail building) inside our natural places, already, to be found on the sidebar of this blog...


"Friends' Webs and Blog Roll" ----->>
Educational reading for the masses


"The aggressive mountain biking agenda hegemony required a more organized, consistent and sustained pushback, perhaps from a newly created and supported state/provincial or national organization to umbrella an effort to counter this mountain biking agenda creep... that threatens the peace and quiet of our greens and commons, our wildernesses and other public lands... at huge public costs and environmental impacts. Perhaps, it is too late... 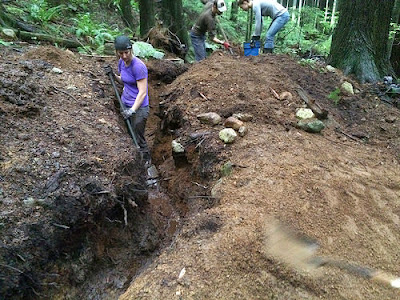 This is the price of hikers/conservationists/environmentalists/equestrians being asleep at the wheel for the last 20/30 years, while the mountain bikers worked like termites..."
~R.R.K., retired "Marin County Open Space District" Planner 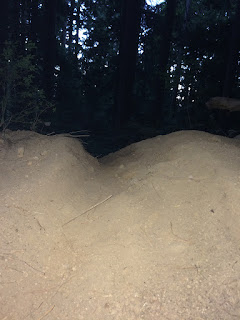 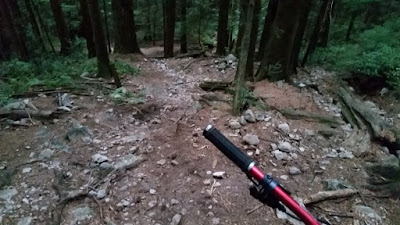 Can anyone repeat: "Debris flow and flooding" (once heavy rains come?)
This will all flow downstream, as our politicians and government entities
continue to support and fund the MTBers' EnviroMental Initiatives.

This is what happens to very eroded, dusty, dry MTB trails after a heavy rain... The Dreamweaver Trail on Fromme Mtn. has turned into a Nightmare...
All this silt washes downslope into streams, creeks, ponds, etc....
(Lovely bunch of coconuts, these MTBers) 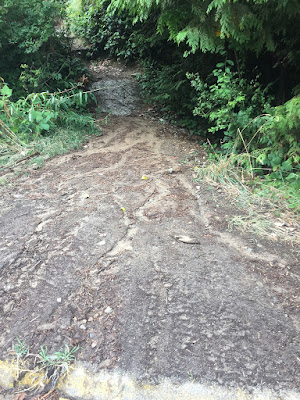 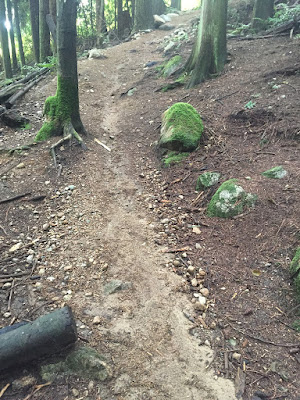 Below, is a rainy day video of Lower Griffen Switchback Trail,
that the District of North Vancouver had deemed to be
"SUSTAINABLE" for mountain biking...
It "helped" to silt the frog pond, too!

Update: The District of North Vancouver had finally closed-decommissioned this pond silting, very eroded trail in March 2019. A decade later than was recommended... <sigh>

(Debris flow and landslide problems can be caused by such land mismanagement, particularly in mountain, canyon and coastal regions. The clock is "ticking" on our North Shore Mtns.)

Perhaps, "It was never really about the bicycle. The contraption was merely a conveyance, a delivery system for a culture and a mind set and an industry that, even twenty years ago, was inevitable. It was about the never ending search to make money, from whatever means was available. It was about the packaging and promotion and marketing and exploitation of beauty and solitude and all the aspects of wild and open country that we once valued, in the name of Greed."
~Jim Stiles, "Canyon Country Zephyr"


“Recreation is no longer about an individual going out into the public land and enjoying themselves. It’s not about relaxation. It’s about weekend warriorism and group parties and conquering nature and corporations selling something. And these groups that support this new form of recreation realize that access is the key to their business.”
~Scott Silver, “Wild Wilderness"

It is time for a BAN on mountain bikers' Trail Running dogs,
who can become seriously injured (or killed) on the trails.
If the mountain bikers want to foolishly pummel their own bodies for a cheap thrillride,
they should leave their dogs at home!

It is sheer cruelty to run dogs ragged up and down the forest slopes for hours at a time!

www.pinkbike.com/news/Pinkbike-Poll-Dogs-on-the-Trail-2014.html
An MTBer writes:
Jan 10, 2014 - "Alright, confession time: many years ago I hit and killed a dog when mountain biking down a fast, open section of trail. It was a terrible moment, ..."

***
Dear Father, hear and bless
Thy beasts and singing birds:
And guard with tenderness
Small things that have no words.
~A Child's Prayer 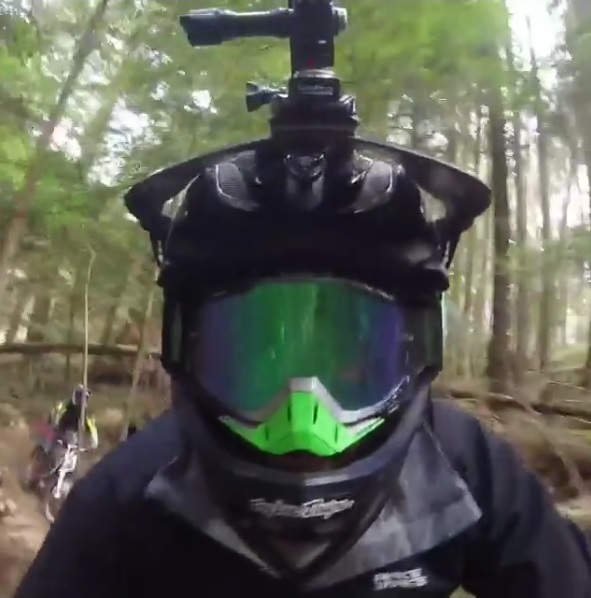 Like aliens in the woods on their mechanical steeds 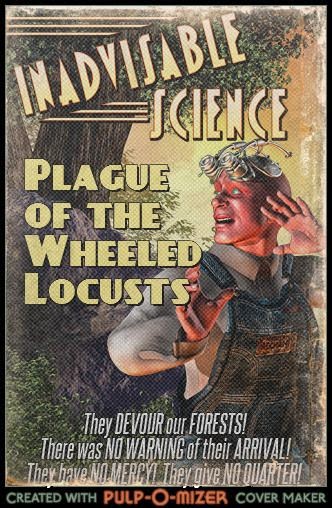 ...in a flash she launches over her (mtn.bike handle) bars. She lands on the ground headfirst, with a chilling thud. There’s a groan from the crowd. “Rider down! Rider down!” a voice announces over the PA... 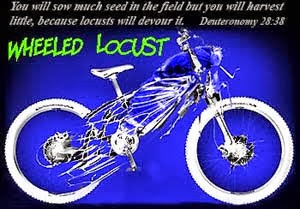 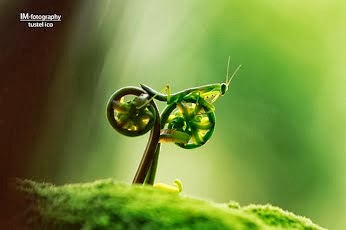 This is the only "biker" that should be allowed in the forest...
“Any off-trail activity is detrimental to the ecology … it prevents the indigenous species from growing in these areas and allows invasive species to come in and take over, it also fractures the habitat for wildlife, and this all happens very quickly.”"Mountain biking is simply an activity that has been determined not to be compatible with our society’s values..."

"Take the only tree that’s left,
Stuff it up the hole in your culture."

Wrong Does Not Become Right...

... just because an outspoken minority engage in it.

The NSMBA Rule the Woods

Politicians & land managers bow to these little gods of MTB 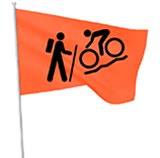 (The new flag of the North Shore?) 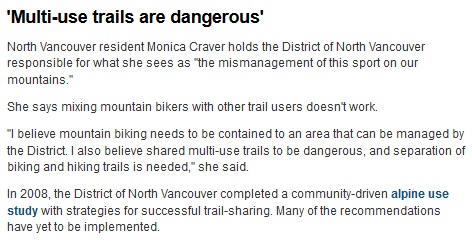 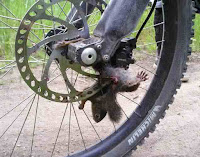 ...leave a wake of Destruction behind them... 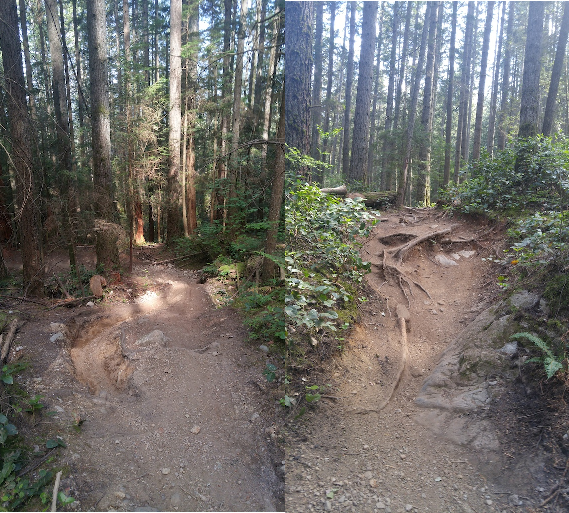 Does anyone give a DAMN about this?

MTBer vs. MTBer War in the Woods

"L L's biased and embellished attempt to discredit Mark Wood and the NSMBA."

(So... who's still sabotaging the bike trails, if they "caught the culprit" back in January 2015? Only the MTBers know for sure... but, they're not talking...)

The Documentary That Never Was...(?)

THE WOODS BELONG TO US examines two conflicting lifestyles: mountain biking and environmentalism, and the outcome when they collide. The conflict has been going on for over twenty years, but there seems to be no end in sight.